If you took player for position no club on the planet has the best players.

West_Winger said:
If Hamilton is so shit then why is Bottas almost 100 points behind him in the same car?

People love to put down those who are excellent at what they do in this country. It’s embarrassing.
Click to expand...

No idea. I asked a question

cosmicchris00 said:
Nikki Lauda moved heaven and earth to get him to Mercedes.

He knew what an outstanding talent he was.


Put all the drivers in a Haas or Williams and he'd still win.

As a nation we need to wake up, he's top 5 all time greatest driver's for me and possibly top 3 greatest UK sports men of all time.
Click to expand...

People don’t like him.
They will never give him the credit he deserves because of his political views

Ronnie is the best snooker player of all time..and a bit of a nob.

Hamilton. He drives a car, and a bit of a nob.

Just revisited this thread then realised we're comparing snooker to Racing, where people die quite regularly.
Let's face it drivers in Formula Ford have put in more hours and dedication than Ronnie and I'm more a snooker fan than car racing 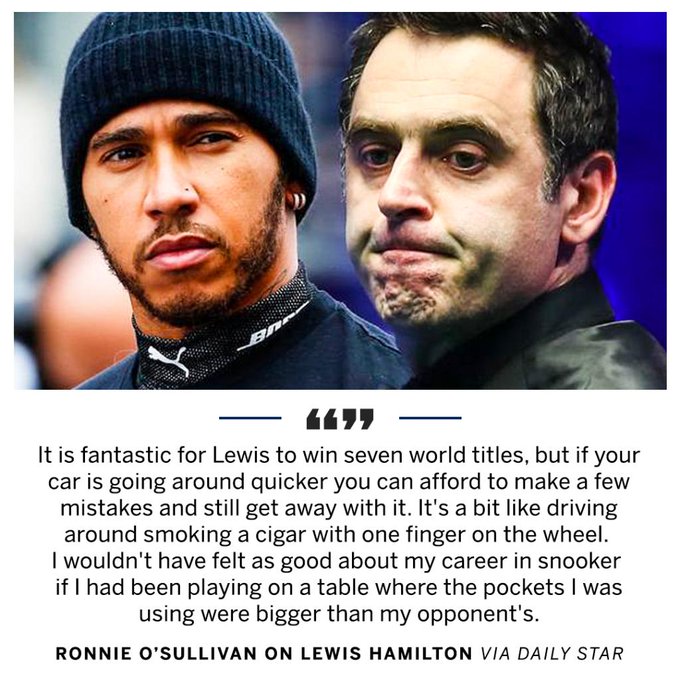 safcforever said:
People don’t like him.
They will never give him the credit he deserves because of his political views
Click to expand...

He's said some silly things in the past, as he often engaged mouth before brain.

Now that he's become more political he was always going to rub some folk up the wrong way.

Muhammad Ali became quite unpopular due to his outspoken views in the 60s, history shows he was right.

With a genuinely good man in power across the pond there are likely to be some significant changes to the way the authorities deal with racial issues.

Hamilton may be seen in a completely different light himself soon.
M

Lardy said:
Nobody knows, I think young Verstappen and Leclerc/Albon would certainly have a big shout
Click to expand...

He always wins in the rain.

It's absolute nonsense. Hamilton has won championships in the past where his teammate has finished 5th or 7th which prove that it's not all about the car. He tends to be in the best cars more often for 2 reasons:

1) He earned a good drive by winning titles at Formula Renault, F3 and GP2.

2) He plays a major part in making the cars as good as they are. He does so much testing and gets involved in the set up to minute details. He's part engineer and part strategist in addition to being a great driver.

Its a completely ignorant viewpoint to be honest.

What did you expect? It’s a pretty ignorant comment from someone who doesn’t know what they’re talking about.

cornish mackem said:
How would Hamilton get on in another car?
Click to expand...

We all know Ronnie's comments are nowt to do with Hamilton's ability or lack of ability to drive cars.

bomber said:
We all know Ronnie's comments are nowt to do with Hamilton's ability or lack of ability to drive cars.
Click to expand...