Almost 24,000 supporters committed to a season card for the current season, and the deadline for those supporters to take advantage of frozen prices for the new season and to also guarantee their current seat for 2019-20, is 4pm on Monday 15 April.

After this deadline, the season card will be considered as lapsed and the seat released. Any purchase after this date would be termed as a new season card and charged at the new rate.

The ticket office will be open this Thursday and Friday from 9am – 5pm for in-person callers and telephone calls. There is also an email address available, ticket.office@safc.com.

The ticket office will also open at 9am on Saturday and close at kick off (3pm). Supporters are advised that the ticket office is very busy on match days and should they wish to renew their season card then they should do so as early in the day as possible.

On deadline day (Monday), the ticket office will be open from 9am until 6pm.

How to Renew
Supporters are asked to read their own renewal information carefully as it has been individually tailored for each season card holder. This information has been sent by email or post.

Most importantly, supporters must be aware that there are two tiers of prices for 2019-20. Supporters who renewed or purchased their season card before July 20 2018 did so at a reduced price and, providing they renew by the April 15 deadline, they can once again do so at this price.

Supporters who purchased after July 20 will also pay the same as they did last season, enjoying a price freeze at the standard price they previously paid. Those who bought 18, 12 and 8 game season cards can also buy a full season card at the frozen standard price.

The two price tiers, which are valid until 4pm Monday 15 April 2019, are illustrated below.

Direct Debit Option
To assist supporters to renew their seat, the Direct Debit payment scheme has been extended FIVE payments. These payments are spread over a ten-month period – between May 2019 and February 2020.

Supporters who previously paid by Direct Debit will have their season card automatically renewed and don’t need to do anything to claim their seat for 2019-20. Renewal information (which should have been received by post or email) confirmed the Direct Debit payment schedule and terms and conditions.

Supporters who don’t currently pay by Direct Debit can still take advantage of the scheme, which is free to join and there is no interest charged. Simply complete the Direct Debit form enclosed within the renewal pack at the same time as you renew your seat. The form is also available online to download.

Moving Seats
If you wish to move to a new seat, you must contact the ticket office by email, ticket.office@safc.com. You must advise SAFC before 15th April that you wish to move to a different seat and they will then facilitate all seat moves on Wednesday 17 and Thursday 18 April. Please do not renew your seat in the meantime if you wish to move.
Your current price will still be held during the seat move process. However, should you choose to move seats to a more expensive area or move up age brackets then the prevailing price would apply, not your current one.

Free Under 8 Season Card Renewal
Free under 8 season cards do not automatically renew. You must contact the ticket office, with proof of age, to renew a seat in this category.

New Season Card Sales
New season card prices for 2019-20 will not be announced until the club’s divisional status is confirmed. Anyone who is not an existing season card holder and wishes to purchase a season card will be placed on a waiting list until such time as prices are confirmed. 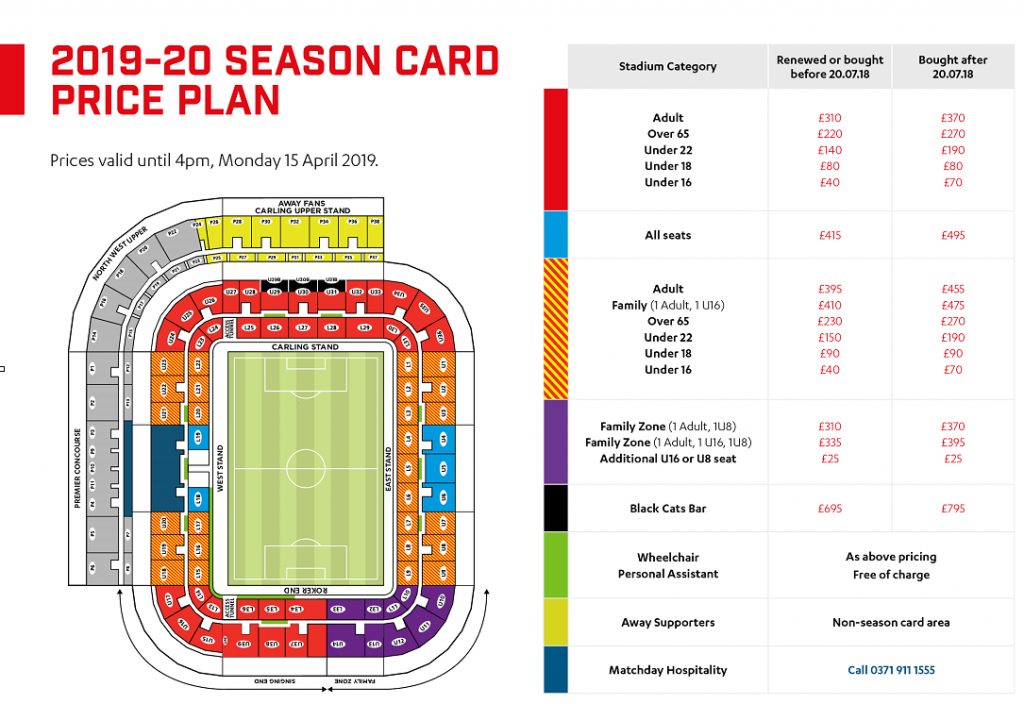