Sunderland AFC fans are being encouraged to show their support for the club with the introduction of a brand new membership scheme.

Red and White Army Membership, which is available to fans across the world, offers exclusive benefits through four special packages.

Divided into Platinum, Gold and Silver tiers of membership, alongside the Junior Black Cats scheme for fans aged 16 and under, supporters can chose which package best suits their needs:

Season card holders at the Stadium of Light will automatically receive Platinum Membership which includes a number of exclusive benefits, as well as all of those offered to Gold and Silver members.

Speaking of the new scheme, Sunderland AFC’s commercial director Gary Hutchinson said: “We are privileged to enjoy one of the most loyal, passionate and vocal fan bases, not only in British football, but across the world, which is evident through the growing number of supporters and fans groups joining us from outside the UK.

“The membership scheme will benefit our existing season card holders, who we know are our lifeblood, but we also recognise that not all supporters can commit to a season card so the membership scheme allows fans to show their support, whilst also benefitting from a number of exclusive benefits and being able to connect more closely with the club.”

As well as receiving exclusive benefits as part of the Red and White Army, any supporters who sign up to become a member by December 26, 2015, will automatically be entered into draws to win exclusive prizes such as meeting the team, attending a first-team training session and seats in the Boardroom for a game at the Stadium of Light.

The membership scheme forms part of the club’s wider aim to connect supporter branches around the world to the Sunderland AFC family. The scheme will help to introduce fans to branches located in their territory, helping to strengthen and grow the club’s support across the globe. 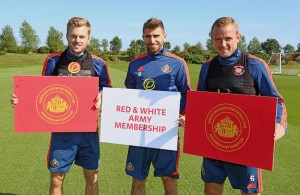 Current season card holders will automatically be enrolled as Platinum members. Fans wishing to sign up to Silver or Gold membership can do so online or in club outlets.

· Online: www.safc.com/membership
· In-person: at the Stadium of Light ticket office or in club retail stores.