You are here: Home / Away Travel / Cheesy picture and article alert 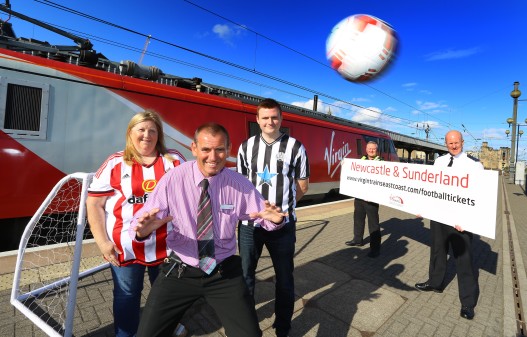 They’re two of the hottest rivals in sport – but today, fans from Newcastle United and Sunderland football clubs teamed up to kick off a pilot plan to make match day journeys safer, cheaper and easier.

Virgin Trains East Coast has worked closely with both clubs, supporters’ groups and the British Transport Police to create an exclusive web page offering special discounts and flexible bookings accessible to supporters of the North East rivals who are registered with their club.

Registering and booking travel via the web page, https://www.virgintrainseastcoast.com/footballtickets will deliver these fan-tastic benefits:

“We know the majority of football fans are well behaved and a credit to their clubs, and this scheme rewards those who travel responsibly.

“Both BTP and Northumbria Police are committed to working with train companies and football clubs to further promote responsible travel and, during the coming season, we will continue to develop the strong community ties and relationships which have been developed.”

“Alongside British Transport Police, Virgin Trains East Coast deserve huge credit for their proactive approach to working with our supporters. They have taken time to consider the hurdles people face when travelling to matches and they have worked closely with fans and the clubs to overcome them.

“We think the pilot will be a hugely popular addition and we look forward to seeing the scheme in action as the football season progresses.”